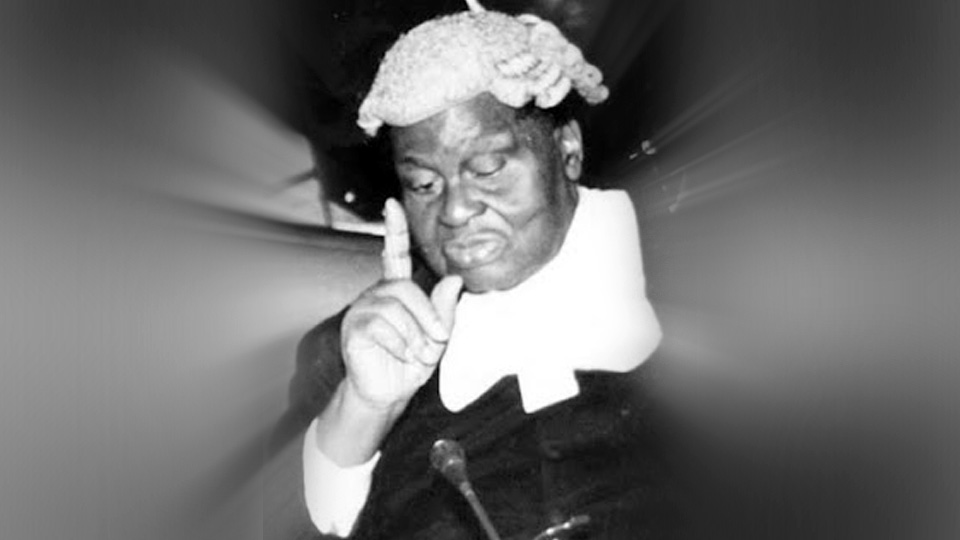 rederick Rotimi Alade Williams, QC, SAN (December 16, 1920 – March 26, 2005) was a prominent Nigerian lawyer who was the first Nigerian to become a Senior Advocate of Nigeria. In the 1950s, he was a member of the Action Group and subsequently became the minister for local government and Justice. He was the president of the Nigerian Bar Association in 1959, the association is the leading body for lawyers in the country. He left politics in the 1960s, as a result of the political crisis in the Western Region of Nigeria.
Throughout his career, he was involved in some memorable and important court cases, such as Lakanmi vs the Western Government of Nigeria, which set the precedent that a military government could not use its power to make laws that will appropriate an individuals property. The Oloye Williams, himself a Yoruba chieftain, was also among a group of lawyers that represented the Oba of Lagos, Adeniji Adele, against challenges by the Nigerian National Democratic Party. The latter had previously gained solidarity and foundation from the ruling House of Docemo in Lagos.

Rotimi Williams was born on December 16, 1920 in Lagos. His older brother was Akintola Williams, born a year earlier, who became a distinguished Chartered Accountant. His father and uncle were both lawyers, and were called to the bar in 1927 and 1892 respectively. He entered primary school in the 1930s, at the Methodist Ologbowo School, then went to C.M.S Grammar School, Lagos for secondary education. Despite being given a full scholarship to study mechanical engineering at Yaba Higher College, he chose to become a lawyer. He earned his bachelors degree in 1942 and was called to the bar at the Gray’s Inn, London in 1943. He set up the first indigenous Nigerian law firm in 1948 with Chief Remilekun Fani-Kayode and Chief Bode Thomas. The law firm was called “Thomas, Williams and Kayode”.

In 1943, he became the first Nigerian solicitor to the Supreme Court of Nigeria and soon thereafter entered the political arena as a member of the Nigerian Youth Movement. He rose to become the movement’s general secretary. However, the movement was soon embroiled in a crisis, which dented its political support among the Nigerian masses. When the movement began to fade politically, he was one of the educated members of the Nigerian political class who joined the Action Group. He was the group’s legal adviser in the early 1950s and was also a member of the Western region’s privy council. He was elected into the Lagos Town Council in 1953 and was subsequently made chairman of the council. In 1957, he became the Western Region’s Attorney General, the first Nigerian to be an attorney general. He was made Queen’s Counsel in 1958, another first for him, as he was one of the first two Nigerians to be made one.
In October 18,1975, Rotimi Williams became the chairman of the Constitutional Drafting Committee. The body was formed to present a draft constitution to be approved by the military administration of Obasanjo. He led the convention to present an agenda for broad coalition building across ethnic and regional lines. The body pushed for presidential winners to have at least 25% of the total votes cast in two thirds of the nineteen states in Nigeria and that each of the 19 states of the federation should have a minister representing them. The political parties should also have support in at least two thirds of the states.

hief F. R. A. Williams’ The Nigerian Nation: Prospects for Survival is a thesis by a witness to the constitutional evolutionary process of the country right from pre-independence to independence. Faulting the yoking together of disparate ethnicities into a single political conglomerate without due consideration for their cultural and organizational dynamics by colonial Britain, the legal guru submits that this is one engaging factor of Nigeria’s post-colonial travails. He traces the defects of our constitutional developmental processes, especially the ones mid-wifed by the military, and insists that sovereignty belongs to the people and that sovereignty should, then, be the foundation for a people’s constitution. Chief William’s solution to the present imbroglio centres on change. National radical change will be tantamount to continental radical change. In view of this, therefore, a re-writing of the constitution in its entirety is the first radical step that must be taken, preferably through a sovereign national conference. He warns about the dangers of complacency and poor quality of leadership as obstacles to the inauguration of a radical change process in the nation.