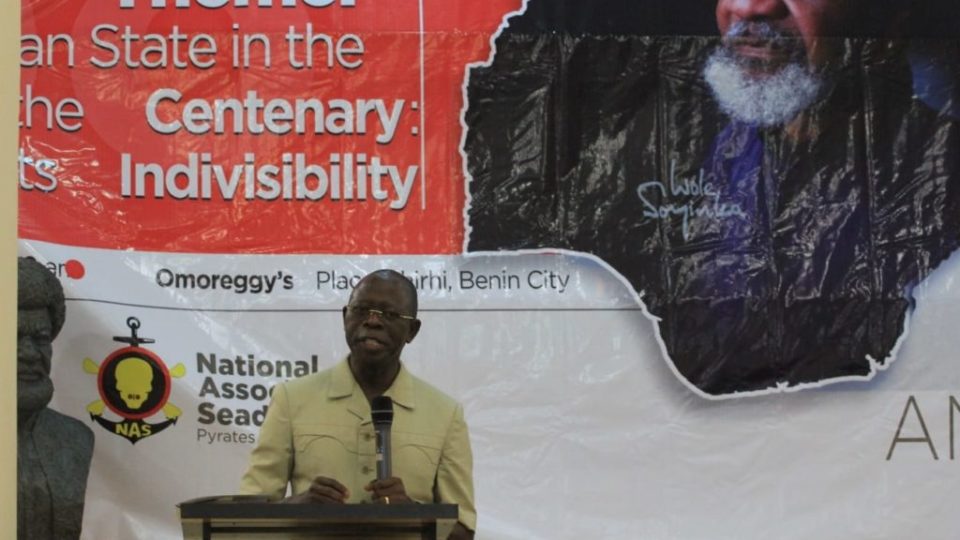 Your Excellency, Governor of Edo State Godwin Obaseki, representative of the governor of Delta State, Professors Wole Soyinka and Itse Sagay, guest speakers, president and members of the National Association of Seadogs, invited guests, all other protocols observed.

I want to start by thanking the leadership of the National Association of Seadogs, organizers of this forum, for giving me an opportunity to offer my humble opinion on the prospects of Nigeria’s indivisibility, especially at this juncture in our nationhood, when the clamour for separation, restructuring and total balkanization have become the preoccupation in our national discourse.

Permit me to also acknowledge the immense contributions of the National Association of Seadogs since inception in 1952, to the growth of our nation through their various advocacy and humanitarian initiatives like the Wole Soyinka Lecture Series, The Medical Missions, The Street Child Project, The Citizen’s Summit and Our Votes Count campaign. These various initiatives have touched lives and broadened the scope of voluntary engagements in the delivery of much needed assistance in many communities.

On the topic for this lecture series, let me begin by saying that, the mere fact that Nigeria has celebrated a hundred years as a nation under one name is an indication that if its people who held on together for that long resolve to hold on together for much longer, there is nothing anyone from outside can do to make it impossible. Suffice it to say therefore, that the unity of this nation depends entirely on the collective resolve of its diverse peoples to live with one another in peace and harmony. But unfortunately, the national dialogue is presently centred on structural issues rather than leadership issues, imbalances rather than the issue of poverty and employment, whether leaders are delivering and at what level, who is not doing what and who is doing nothing. Looking at it critically, structure is such a nice word, even builders talk about structures and depending on the strength; a building can stand or collapse. So even builders understand the essence of what you might call, viable or the structural integrity of an edifice. If everything is right and the structure is faulty of course it can’t stand, so when people play up such words, it is natural for different people react differently. But my view is that, we do have solidly viable structures and ours is a situation where some people have become victims of having their attention diverted from the real critical issues of leadership and governance, to questions of ethnicity, the politics of sharing, how to manage and entrench poverty and take as given, a society that can offer everything to everyone and avoid discussing the paradox of such a wealthy nation but increasingly populated by people who are getting poorer and poorer. The UN welfare index year after year suggests that majority of our country men and women are simply getting poorer by the day and even official statistics which ordinarily should be very conservative suggest that more and more people have no jobs to do and in the absence of social security, to the extent that one man social security system cannot cover everyone. Personally, I run a one man social security system and I am sure everyone else present here run all sorts of informal social welfare systems in varying degrees by paying your brother’s school fees, settling your uncle’s medical bills for the surgery, bailing out a friend in need and so on. We all find one way or the other to provide for our relations especially when you work. That is what I refer to as a one man social security system. But for those families who do not have anyone, they are completely excluded, socially, but unfortunately right now the national discourse is not about poverty, wealth creation and distribution of wealth, rather we are discussing whether our structure is right or wrong.

As for those who say we were forced into becoming one nation, it is good they also know that not everything forcefully done that is wrong. What is important is how we make the Nigeria project a reality, to ensure that it delivers to all of its citizens, in such a way that each and every one of us has a basis to remain loyal to the nation state, not whether we should repartition. I just want to add, and this might sound provocative, that there is no part of Nigeria that is doing Nigeria a favour by being part of Nigeria. No one is doing the other a favour, who? I think we all need Nigeria more than Nigeria needs us. When I look at places we love to travel to, they are not homogeneous either, yet they have been able to take advantage of the opportunities provided by their nationhood to attract us as visitors for tourism, education, business etc.  We should begin to appreciate what economists call the benefits of economics of scale, because when you do a cost benefit analysis, there is huge advantage in a large market that a united Nigeria offers everyone, particularly in a market driven economy like ours. With 170 million mouths to feed and clothe, you all know I come from the textile industry, if we had gotten our policies right, and all of us were wearing Nigerian made fabrics, we would have an industry that can employ 10 million young men and women to cloth all of us since we like to wear long flowing attires, including a cap and when you put everything together, one man is wearing 10 meters of fabrics material at every given point in time. We are generous in fabric consumption than any other tribe anywhere else in the world. All of that will translate into benefits for the textile industry and because we got our policies wrong all those factories have folded up and all of us here, unfortunately myself inclusive, from what we wear on our heads, to the one in the ear for the ladies, to what we wear on our bodies, the socks and the shoes we wear on our feet are all completely imported, because we have sustained and incoherent industrial policy. What we have achieved before, we have lost and today we are net importers of everything we wear and even a lot of the things we consume. I think what should engage our attention is an honest conversation on what we are not doing right as a people rather than how we share the dwindling resources from oil sales.

As we sit in this auditorium right now, I am certain that all the diversities of this nation, in terms of culture, religion and ethnicity are adequately represented. The very fact that we all sit here as Nigerians to brainstorm on the prospects for the indivisibility of the Nigeria nation, infers by implication, that we are actively seeking ways and making practical efforts to protect the unity of this country as one indivisible entity.

This brings up the question of what role we as Nigerians should play individually and collectively to guarantee the indivisibility of our motherland. The voice of a restless minority agitating for the divisibility of Nigeria is recently so loud and misleading that we all must be proactive in our reaction to the present state of the union.  This is not the time for procrastination or indifference. It is a critical time for every Nigerian to stand up and be counted for what he or she desires for our country, which unarguably belongs to all of us. It is a constitutional duty and it is expressly stated in our national pledge “To defend her unity”. This is the time for the Igbo man living in Kano to declare his stand, the Hausa man living in Aba to declare his stand, the Yoruba man living in Yenagoa to declare his stand and the Edo man living in Jos to declare his stand. We do not need a referendum to convincingly argue our positions in this public discourse. Our Pastors and Imams have a role to play. Civil society organisations, humanitarian organisations, media organisations and community based societies should exert their influence upon their members to shun hate speeches that threaten the unity of this country.

I have said it elsewhere and I want to reiterate that the situation we find ourselves today is one where a vocal minority under the leadership of persons with anything but altruistic motives, capitalized on the seeming restlessness occasioned by years of irresponsible political leadership, to seize the national narrative and somehow succeeded in engaging the hardworking majority in a dialogue that has no focus, no vision, no sustainable ideology and no prospect of changing the circumstances of any Nigerian, other t